Warning: Invalid argument supplied for foreach() in /var/www/u0551306/data/www/basalioma.net/wp-content/themes/basalioma/header.php on line 12

Solasodine rhamnosides, solamargine and solasonine, are antineoplastics with high affinity, high efficacy and low toxicity as shown in cell culture, animal and human studies. The mode of action is by apoptosis and is accompanied by a high order of specificity. This specificity towards cancer cells is ideal for treating skin cancers. Previous studies show that solasodine rhamnosides in a topical cream formulation CuradermBEC5 is a highly regarded therapy for nonmelanoma skin cancers. A case is reported which indicate that CuradermBEC5 is clinically effective for the treatment of a large basal cell carcinoma on the nose of a patient that had been treated unsuccessfully on three previous separate occasions by surgery, radiation therapy and photodynamic therapy

Treatment for nonmelanoma skin cancers (NMSC) depends on the size and location of the cancer, whether it is BCC or SCC, and age and overall health. The goals of treatment for NMSC are to remove the entire skin cancer and a margin of skin tissue around the cancer to reduce the chance of recurrence and to preserve nearby skin tissue that is free of cancer and minimize scarring after treatment.

For BCC, additional options are available, including photodynamic therapy, laser surgery, topical creams such as topical fluorouracil (5-Fu), and topical imiquimod. The advantages and limitations of these treatment options have previously been described [1-3].

However, most of the above treatments lack specificity. This deficiency translates to these treatments not being completely effective in all patients for various reasons, such as, insufficient excision margins. This is a major shortcoming with current therapies.

Solasodine rhamnosides are secondary metabolites of plants and protect against bacteria, viruses, fungi, insects and animals. They are found mainly in Solanaceae and Liliaceae. Recent reports indicate that solasodine rhamnosides can induce apoptosis in cancer cells. Thus, several studies have shown positive clinical and histological effects of topical application of solasodine rhamnosides to skin cancer [1-11]. In this paper, we present a case report of a patient with a large recalcitrant BCC on the nose.

A 78 year old woman was referred for consultation because she had a 2-cm large and several mm deep tumour on the tip of her nose (Figure 1(a)). The patient had a history of BCC treated by surgical removal followed by laser and photodynamic therapies. Histological analyses of a biopsy showed the recurrence of the BCC.

The patient who had this relapsed BCC elected to treat the lesion with the cream formulation CuradermBEC5. The cream formulation CuradermBEC5 is registered in the Russian Federation and in several countries and is available to patients. CuradermBEC5 contains the glycoalkaloids BEC consisting mainly of solamargine and solasonine [1-11] at 0.005% as a topical cream formulation. The cream was applied 2-4 times daily under occlusive dressing (micropore paper tape) until the lesion had clinically regressed. The patient experienced some transient minor stinging that lasted for up to 15 minutes after application of the cream to the lesion. The patient was followed up after 10 weeks after completion of therapy.

Figure 1(a) shows the extent of the BCC after failed previous therapies but just before treatment with CuradermBEC5. The lesion responded rapidly to the treatment and appeared larger at 2 weeks of treatment (Figure 1(b)). 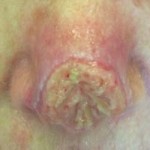 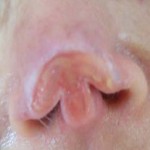 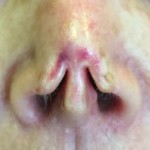 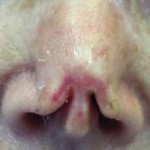 Solasodine rhamnosides preferentially interact with cancer cells only, but not normal cells and subsequently cause apoptosis only in cancer cells. This phenomenon is due to identified and characterized specific receptors, found on cancer cells only [1], which bind and internalize the solasodine rhamnosides leading to interaction with lysosomes and mitochondria. Subsequently, these cells commit suicide (apoptosis) by triggering intrinsic and extrinsic apoptotic pathways by up-regulating the expression of external death receptors such as tumour necrosis factor receptor 1 (TNF1), Fas receptor, TNF- 1 associated death domain and Fas associated death domain. The solasodine rhamnosides enhance the intrinsic ratio of Bax to Bcl-2 by up-regulating Bax and down regulating Bcl-2 and Bcl-x expressions. These effects result in activation of the enzymes Caspase -8, -9 and -3 leading to apoptosis in cancer cells [1,2].

Open studies and double blind placebo controlled clinical trials have shown that solasodine rhamnosides in a cream formulation CuradermBEC5 is very effective for treating NMSC [1-11]. The main feature of CuradermBEC5 therapy over other therapies is the specificity towards cancer cells, which translates to low recurrences of the cancers and the impressive cosmetic outcomes.

The case presented here is a large and anatomically difficult to treat BCC. Treatment with CuradermBEC5 resulted initially in an increase in size of the BCC indicating the removal of cancer cells that were initially not observable with the bare eye. Continual treatment afforded reduction in size until the BCC was clinically completely eliminated. During this process the eliminated cancer cells were being replaced with normal skin cells indicating specificity of CuradermBEC5 for cancer cells. It has been reported that in some instances the initial increase in size with CuradermBEC5 therapy could be as high as double the initial lesion size [3].

Therapy with CuradermBEC5 is self-titrating, treatment is only stopped after the entire lesion has been replaced with normal skin and this depends on the type, size and depth of the lesion on the skin. Hence small BCC lesions can take one week of treatment and large lesions may take up to 14 weeks treatment. Treatment is only stopped when complete clinical regression is observed. These treatments criteria have resulted in no recurrences for over 5 year’s follow-up periods [1]. These observations are only possible because of the specificity of the solasodine rhamnosides in CuradermBEC5 towards cancer cells. With the case presented here, CuradermBEC5 therapy required 14 weeks of treatment. The BCC was initially 2 cm in diameter and had undergone three failed therapies including surgery, laser and photodynamic therapies.

Recently it was reported that CuradermBEC5 therapy was effective in patients with BCCs that had previously undergone a failed treatment with either surgery, radiation therapy, photodynamic therapy, cryosurgery or imiquimod cream [9]. This is the first reported case whereby three different therapies had failed on the same BCC and that CuradermBEC5 was successful in its removal.

The follow-up period for the case presented here is currently 10 months with no signs of recurrence. Patients who have been treated with CuradermBEC5 for BCCs and SCCs and have been followed up for 5 years have not shown recurrences [1-9].

A.F. Batsev and V.Z. Dobrokhotova supervised the treatment of the patient. B.E. Chamanalysed and interpreted the patient data and was a major contributor in writing the manuscript.